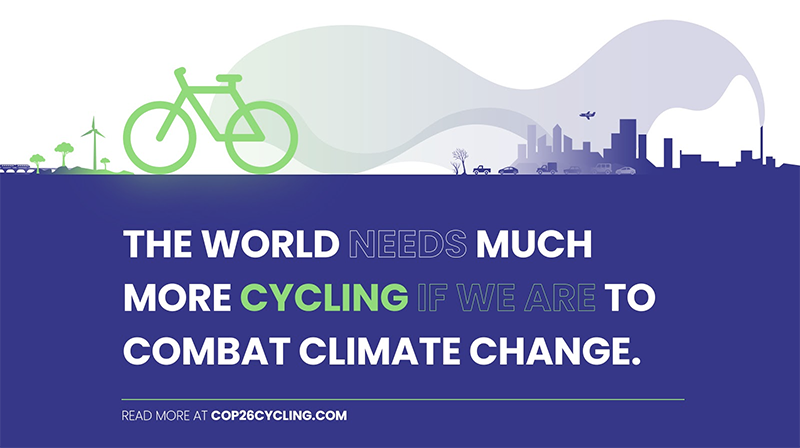 An open letter by the European Cyclists’ Federation (ECF) and a global coalition of pro-cycling organisations, including Cycle Wellington are urging governments to cut transport emissions by investing in cycling has seen a surge in support from all over the world.

Since it was published on 2 November, over 250 civil society organisations have added their signature to the letter from all over the world, including ECF, Greenpeace and Union Cycliste Internationale (UCI). The letter calls on governments at COP26 to commit to significantly increasing the number of people who cycle in their countries in order to reach climate goals quickly and effectively.

As the global pro-cycling movement continues to grow ahead of COP26 Transport Day (10 November), which is set to focus almost exclusively on the electrification of road vehicles, governments and transport ministers will be under pressure to take cycling into account when negotiating climate commitments related to the transport sector.

Today, transportation is responsible for 24% of direct CO₂ emissions from fuel combustion, with the vast majority coming from cars, and these numbers are not decreasing. With global temperatures rising fast, humanity cannot afford to wait decades for fossil-fuel cars to be fully phased out and replaced by electric vehicles. To quickly cut transport emissions on a massive scale and keep 1.5°C alive, governments need to invest in much more cycling now.

ECF and its allies believe cycling represents one of humanity’s greatest hopes for a shift towards a zero-carbon future. Cycling produces zero emissions, delivers far-reaching positive societal impacts and relies on technology that is already widely available today.

The more than 250 signatories to the open letter call on governments and transport ministers attending COP26 to declare commitments to significantly boost cycling levels at home and collectively commit to achieving a global target of higher cycling levels. The letter was sent to governments ahead of COP26.

Alex Dyer, Co-Chair of Cycle Wellington: “We simply must look more seriously at urgently enabling the more efficient, sustainable, healthy, empowering, and attainable mobility option that cycling affords. The assumption that our climate commitments can be met with a global shift to electric cars is a dangerous gamble. Why would governments not also prioritise the many safety, public health, economic, social, and other environmental benefits of more mode shift away from private cars for as many people who can?”

Jill Warren, CEO of the European Cyclists’ Federation: “The dramatic growth of this global civil society movement in only a few days sends a forceful message to governments at COP26 about the importance of active mobility. There is no conceivable way to reduce CO₂ emissions quickly enough to avoid the worst of the climate crisis without significantly more cycling.”

Henk Swarttouw, President of the European Cyclists’ Federation: “More people riding bicycles will reduce our transport emissions and help save our planet. It will also stimulate our green economic recovery after COVID-19 and relieve our overburdened public health systems. Investing in cycling is a low-cost, low-tech no-brainer. It is what any sensible political leader should be doing right now.”

Read the open letter to governments at COP26: www.cop26cycling.com

For only $5 a month you can make a difference.

Your contribution will go towards:

33% of contributions go to CAN (Cycling Action Network). CAN is the national body that coordinates cycle advocacy throughout the country.